Sarum Rotary Club have provided a full scholarship to a young athlete from Salisbury to have a world-class mentor for a full year as part of a programme run by the True Athlete Project (TAP).

A member of the City of Salisbury Athletics & Running Club, Cameron Jacobs, aged 14, of Harnham in Salisbury, was selected from a number of young people that applied for the scholarship through Sarum Rotary Club. 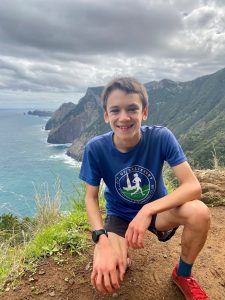 The TAP mentoring programme matches young athletes from any sport or location across the globe with mentors that are current or former international-level athletes, many of whom are Olympians and Paralympians. Mentors are trained to deliver TAP’s holistic curriculum which focuses on the mental and emotional aspects of sport and is designed to help mentees to develop resilience and learn strategies to overcome any challenges that come their way – in sport and in life. Their 2021 cohort includes 68 athletes across 33 sports and 10 countries.

Cameron’s story touched the hearts of the members of Sarum Rotary Club that reviewed the applications because he’s had to deal with so many personal difficulties and health issues in his life already, yet he showed how committed he was to running, both for pleasure and competitively.

Cameron is an incredibly keen trail runner and has enjoyed competing in both cross country and track events. He has Asperger’s Syndrome, ADHD and growth hormone deficiency. The full extent of these conditions was only realised during his transition from primary to secondary school, resulting in a very difficult year for him. Every day presents challenges for him particularly in terms of managing his ADHD, daily self-injections and navigating the world around him with autism but running has always helped him. He doesn’t let any of this stop his drive and ambition to run at the Olympics! Cameron, who now attends Grateley House School, said “people think my Autism and ADHD are disabilities and barriers, but when it comes to running, I feel like they give me a super-power that enables me to just keep going”. 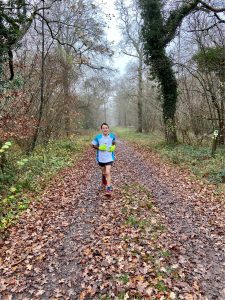 Cameron runs every day after school, regardless of weather and he frequently runs barefoot, which is something he loves to do. Since the first COVID lockdown, he has also been running a half marathon most weekends, often with his father, Neal Jacobs, an orthopaedic surgeon at Salisbury District Hospital.

A frequent attender of Salisbury Parkrun, Cameron was given the award of Salisbury Parkrunner of the Year in 2019. Then in July 2020, he ran the whole of the Avon Valley Path, a trail that stretches 58 kilometres from Salisbury to Christchurch, to raise money for Salisbury Area Young Musicians. He completed this in a single day and raised over £1,500.

In his application for the scholarship, Cameron said that he’d like to encourage other children with hidden disabilities to take up a sport and show them that they can still do incredible things and that what other people perceive as difficulties and challenges can, in fact, be really positive attributes to becoming a successful athlete.

Cameron began running at an early age, with his mother Polly Jacobs, a GP at Salisbury Medical Practice. She could see how much he loved it and how much it was helping with his ADHD. He was doing 8 mile runs by the age of 9 and has progressed to longer distances from there. 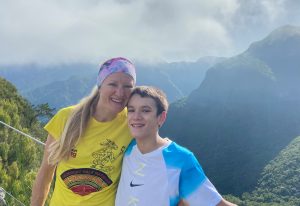 Dr Jacobs commented on the moment when Cameron was told that he’d been awarded the full scholarship by Sarum Rotary Club by saying “he was completely overjoyed. He’s excited about improving holistically as an athlete and is looking forward to being able to discuss the challenges and highlights of training with his mentor. He sees this as a really incredible opportunity, not just for himself, but to hopefully inspire others, especially those with disabilities”.

The TAP programme will be informing Cameron of who his mentor will be on Sunday 17th January. From then on, Cameron will meet regularly with his mentor for a full year.

Andrew Longland, Sarum Rotary Club’s Media Co-Ordinator, who was part of the team that assessed the applicants for the scholarship, commented “we were astounded by the quality of applications we received and it was a very difficult process to narrow them down to just one young athlete to award the scholarship to. Cameron appeared to be the sort of young athlete that would benefit greatly from having a world-class mentor who can help him with the mental resilience that’s needed to compete at the highest level. We were also very pleased to hear that TAP have offered partial scholarships to the programme, from their own funds, to a couple more of the applicants that we assessed”.