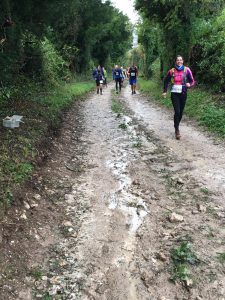 Despite the pouring rain, Sunday 4th October 2020 saw over 800 runners take on the Clarendon Marathon from Salisbury to Winchester. The annual event organised and managed by the Rotary Clubs of Sarum, Salisbury and Winchester was in doubt for a while due to COVID-19 restrictions but the team of volunteers worked tirelessly to put on a safe and socially-distanced outdoor sporting event.

The vast majority of the course is cross-country, following the Clarendon Way, giving runners a picturesque but challenging event at the best of times. When combined with the heavy rainfall during the week, it meant that participants and marshalls were faced with massive puddles and areas of mud and bog along the 26.2 mile route.

The country tracks and paths used on this route have largely remained the same since being travelled by ancient Kings and Queens of England (but perhaps slightly less muddy!). The marathon event was first run in 1998. It was founded and organised by Paul Elderkin, a keen runner and member of a local Hash House Harriers Club. In 2012, Paul passed the management of the race over to the Rotary Clubs in the cities of Salisbury and Winchester, including Sarum Rotary Club.

As well as a full marathon, this year’s event included a half marathon, a 5-mile run and a marathon relay. There was a great turn out for all races, with over 300 runners taking part in the full marathon.

The fastest time in the full marathon was recorded by Matthew Hammerton of Romsey Road Runners who finished in 3 hours, 1 minute and 26 seconds. Matthew’s teammate, Tom Bray, achieved a time of 1 hour, 20 minutes and 20 seconds in the half marathon, whilst in the 5 mile run there was a great time of 26 minutes and 10 seconds achieved by 17 year old Rhiannon Paton of Westbury Harriers. Full results of all races can be found at https://www.athlinks.com/event/45836/results/Event/939752/Results

Twitter saw a flurry of tweets from runners after the event and these included Liz Beverley stating that it was a “Really well organised event given the circumstances. It was excellent” and Bitcoin Runners commenting on what was a “Perfectly organised event”.

There were also reports aplenty coming into Sarum Rotary Club of how much the marshalls that were volunteering enjoyed the event, loving how their encouragement of the runners all along the route was helping to keep spirits high in such challenging conditions. Many of the marshalls and the event start co-ordinators were members of Sarum Rotary Club but volunteers from across the community were drafted in to help too, for which everyone is very grateful. 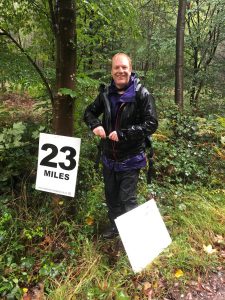 The success of this event is a true testament to the great co-operation seen between the three Rotary Clubs. Even when the tent that was sheltering the volunteers at the starting location in Salisbury took off in the wind, everyone kept going and made sure that all runners were taken care of. 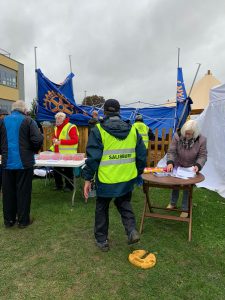